Riding down the Ribbon on the Rocket this past weekend, I was remembering some of the cool things that used to be there. I also remembered a couple of great posts on Tulsa Gal, so I emailed her and asked for permission to reprint parts of them here. She has graciously allowed such. So what follows is from her [although a couple of the comments are obviously from me] Photos from TulsaGal, The Tulsa Historical Society and the Beryl Ford Collection/Tulsa City County Library. Oh, and did you know that Beryl Ford was my Malamute's Great Uncle? Yep, so it's kinda all in the family...   :)

When Tulsa WWII veterans returned from Europe and the Pacific they found great housing from which to choose from here. $300 down would get them into a cute $7,000 bungalow. These cookie-cutter homes directed at the GI market became synonymous with Brookside.
(click on photos to enlarge) 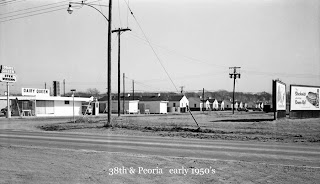 Shopping in Brookside was a casual alternative to downtown shopping. 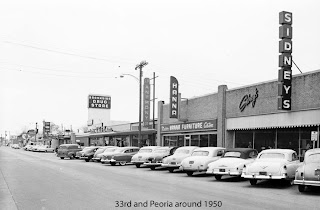 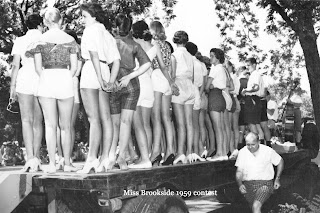 Family-owned Pennington’s Drive In opened in 1951. 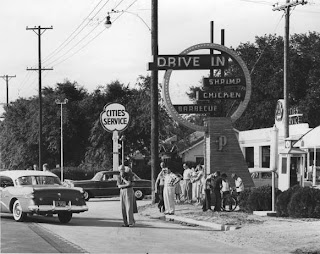 Located at 4235 S. Peoria they were known for their fried shrimp and blackbottom pie. It was a hang-out for many high school students, including myself. This is the way I remember it in the 1970’s: 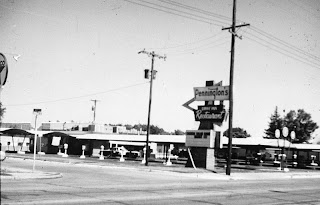 There was the Brookside Market located at 3620 S. Peoria that had fancy food and home delivery: 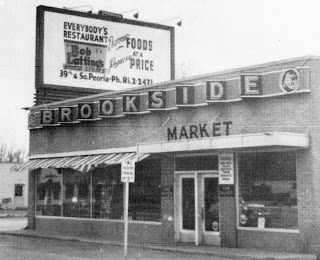 And the Brookside Coliseum catered to the roller-skating mania that lasted until 1963: 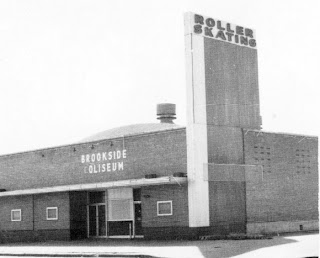 Vernon Mudd was a refinery worker-turned builder and became the first major developer of South Tulsa. He built Bellaire Village in the early 1950s and was told it was “too far out in the country” (at 51st and Peoria) to succeed: 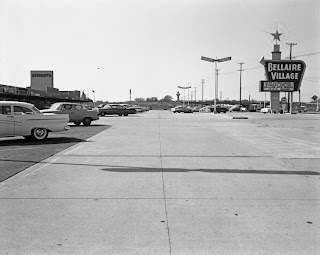 I had 2 different people ask Brookside-related questions within the same month. The first one was: how did Brookside get its nickname? The 2nd one was: how did Crow Creek get its name?
Brookside began as a part of the Creek Indian land just south of Tulsa. [ YrHmblHost notes that this area was used/cruised by the Danes and Celts as early as ~ 4-600 AD ; there are instructions to someone giving directions downriver still extant, carved in the ancient Celtic Ogam in a natural cave behind the Pepsi plant. See the books 'In Plain Sight' and 'America BC' ] This land was granted to the Creek Nation in 1824. The Perryman family (Creek) was one of the first families to settle in this area and operated the first post office in 1882 at the home of George Perryman near what is now 41st & Trenton. (A marker stands at this site today.) If you click on the picture to enlarge it, you will see a circle around the section of their home that served as a post office: 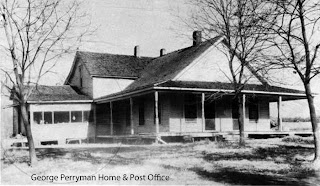 Lewis Perryman came in 1884 and established a trading post along the Arkansas River. They once had a ranch encompassing more than 60,000 acres between Tulsa and Broken Arrow. A branch of the Chisholm Trail passed across Crow Creek near 32nd and Rockford. This was cattle country early on. Wagon tracks were still visible in the 1930's. 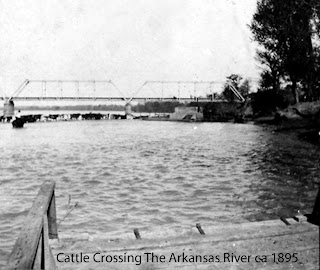 That being said, Brookside could well be considered one of the oldest parts of Tulsa.
It is believed that a store owner by the name of Guy Scroggs was the first to use the name “Brookside” when he named his drug store Brookside Drugs around 1940 and it stuck. 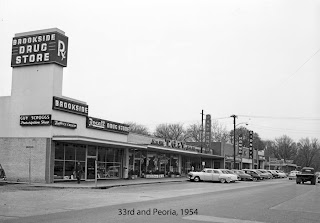 In the 1920s people were saying the smart place to buy land was out in the country on South Peoria. Where the city limits sign stood in a weeded lot. And you had to drive into town to purchase goods. The Allmore Apartments, 1339 S Peoria in 1929 must have been right on the "edge" of town then. 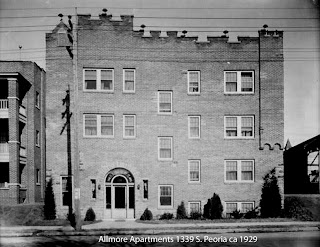 The Brookside area was sold 3-5 acres at a time back in the 1920s. Smart people figured the town would grow in that direction and the value would increase. And it did. This is the area loosely defining Brookside: 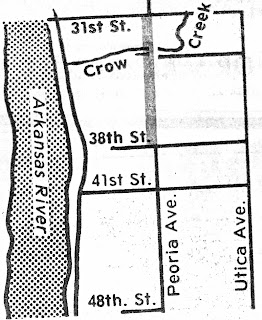 Here are a few more nostalgic looks at Brookside over the years: 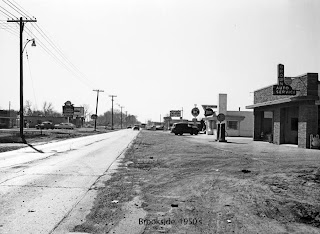 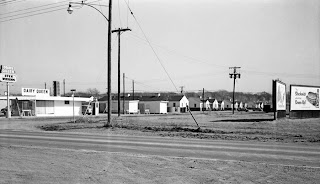 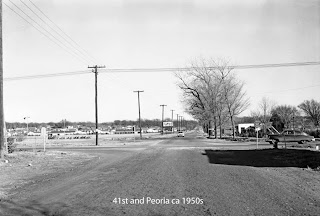 And the 2nd question? Crow Creek was named after a railroad president, not a bird.

Thanks again to Nancy for her generous loan of material on Peoria in the early days. Be sure, dear reader, to check out her blog for more Tulsa history.


postscript/addendum : The motorcycle mentioned in the opening  was borrowed from a buddy for a weekend ride around the area. In November, said friend was riding in the hills of the northeastern part of the state when a sizable deer came bounding down the side of a hill and ran into him, sending my buddy, the bike and the deer rolling down the rock strewn face opposite. Neither the deer nor the motorcycle survived, and my friend got a ride in a helicopter. RIP Rocket III and get well soon Monte.

Posted by YrHmblHst at 4:38 PM

Email ThisBlogThis!Share to TwitterShare to FacebookShare to Pinterest
Labels: history

YrHmblHst
Of what little money I have managed to make so far, surely 90% has been spent on old cars and new motorcycles. Alas, the rest I seem to have wasted...